A Quick Look At The High Trading Volumes Of Cryptocurrency, Is It A Scam?

The trading volumes of cryptocurrency are much higher in a relatively short existence, being envious of the ordinary stock trading. 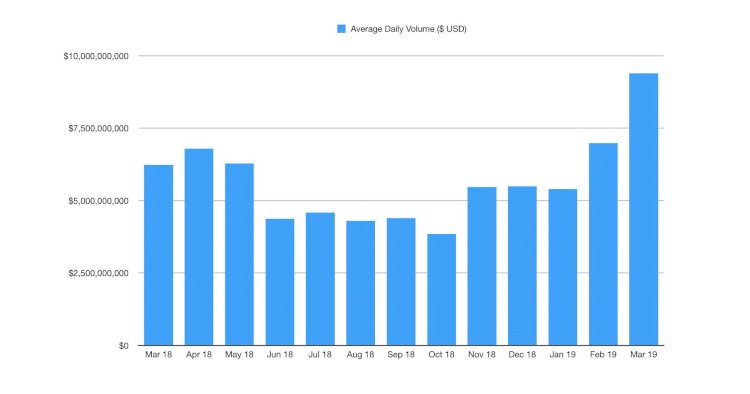 The trading volumes of cryptocurrency are much higher in a relatively short existence, being envious of the ordinary stock trading. The Bitcoin introduced in 2009, trades between $3 billion and $6 billion per day. The General Electric Company, listed in 1962 peaked at $1 million in the same period.

The major beneficiaries of high trading volumes are the cryptocurrency exchanges which rake up in trading fees. The question relevant here is how do they manage such high figures. On checking the order books at exchanges, analysts are raising red flags

Why Is There A Mismatch In Incentives And Website Visits?

It has been taken into account that Singapore based crypto exchange Bitforex’s trading volume shows anomalies. Along with the fees charged by the exchange, it has an incentive program linked to it for the users. This transaction mining program offers $1.20 in digital tokens for every $1 spent in transaction fees. With multiple accounts and algorithmic programs known as bots, it makes possible increased trading volume between accounts as well as earning many tokens.

With an increase in the value of distributed tokens, the transaction makes profits. This is known as wash trades and the investigation is open by the US Justice Department into the exchanges involved in the practice. According to Calvin Cheng, an entrepreneur in Singapore, most of the trades are bogus trades. Asim Ahmad, founder of Eterna Capital claims even the largest exchanges cannot be trusted with accurate trading volumes.

While there is no correlation between several website visits and trading volumes, even those cryptocurrency lists in exchanges report trading volumes running into billions of dollars questioning its credibility. Experts have found that almost 40% of trades at the top 30 exchanges come from eight venues with the highest volume to visits ratio. The website visits for Bitforex and the transaction volume report a disconnect. The Japanese exchange called Liquid is another culprit said to have high trading volume numbers due to automated traders conducting trades using algorithms instead of website visits.

How Important Are High Trading Volumes?

There are mainly two purposes behind large trading volumes at the exchanges. Firstly, the prevention of slippage or drastic price movement in the cryptocurrency price is enabled upon a significant sale. The second one is it becomes the testament to the trustworthiness of the platform indicating user trust in the industry zooming into mainstream focus on the back of scandals and scams. Being important indicators of price movement, increased trading volumes are considered to be a precursor to the big price move.

The cryptocurrency exchanges have long been accused of fabricating trading volumes figures. Sylvain Ribes, have found the China-based exchange OKEx with high trading volumes witnessed an enormous slippage when a sale of cryptos worth $50,000 was made. On revising the trading amount to $20,000 the results were similar concluding that 93% of OKEx volume was fabricated.

Similar experiments have found similar data points at other cryptocurrency exchanges. Another of the China-based exchange called Huobi is estimated to be 81.2 % of fake volume. Tagging along is HitBTC and Binance arguably the biggest crypto trading platform showing similar large slippage amounts.

Why The Bitcoin Trading Volume Hit A Two Year Low?

As of December 2017, the BTC transactions had a downward trend with the price after reaching the highest level earlier. The Bitcoin price has settled with investors seeming to lose some spark in driving the Bitcoin boom last year.

As against the sky-high prices in 2017, the recovery of the price is still not up to the mark in spite of support extended to Segregated Witness technology promising transactions faster and cheaper.

The investors are more or less interested in the overall trading potential as opposed to the efficiency exhibited by the crypto. Roughly one out of every three Bitcoin transactions is done by SegWit.

Terming the ascension in prices mainly driven by speculation, critics find nothing surprising. Investors adopted a ‘buy and hold’ approach for cryptos like Bitcoin as they sit back and watch the market rather than engaging in the active transaction. This strategy is viable as long as speculation drives up the prices in the realm of digital currency. If without sufficient trading activity, prices seem unlikely to remain where they are forever.

6-Digits 'Inevitable,' According To Bitcoin's Big Believers: And Here...

Starting To Spook Traders Is The $750 Million Pre-Halloween Bitcoin Options...

The Tricks And Tactics Behind Bitcoin Halving