Cryptocurrency pioneer, Bitcoin is not only a trendsetter but a robust coin built on a decentralized peer-to-peer network. Ultimately it has become the de facto standard inspiring the legion of followers and spinoffs. 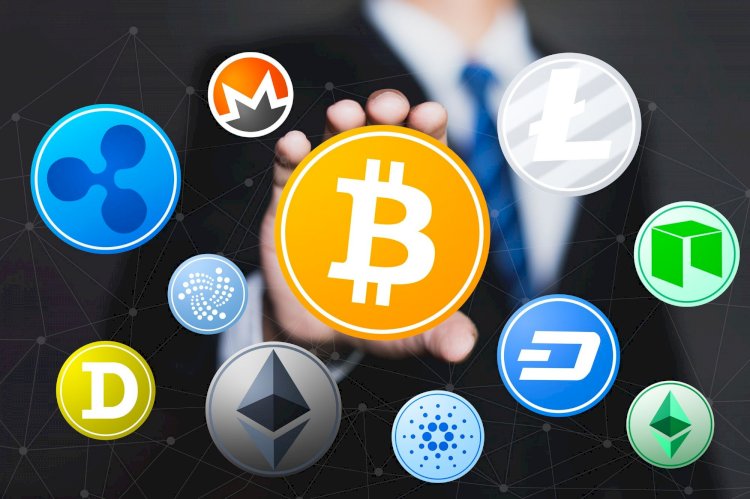 Cryptocurrency pioneer, Bitcoin is not only a trendsetter but a robust coin built on a decentralized peer-to-peer network. Ultimately it has become the de facto standard inspiring the legion of followers and spinoffs.

A few words on cryptocurrencies.

Let’s talk a bit about the alternatives to bitcoin and before that let's examine what it means when we say cryptocurrency and altcoin. It is defined as virtual or digital money in the form of tokens or coins. They remain intangible even though some have taken the step into the physical world with credit cards or other projects.

In cryptocurrency, the crypto refers to the complicated cryptography that allows the generation, storage and secure transaction of typically anonymous digital token. There is a commitment to decentralization as the currency is developed as a code by teams that build in mechanisms for issuance sometimes through a process known as mining.

The main takeaway is that it is designed to be free from governmental manipulation and control though the growing popularity has put this fact under fire. The followers of bitcoin are collectively called altcoins that present themselves as a modified and improved version of its predecessor. Lesser liquidity, acceptance and value retention make these coins risky even though they are easier to mine than bitcoin.

Here is a list of digital currencies other than bitcoin. The bottom line is that the list is impossible to be entirely comprehensive. The main reason is that there are more than 1600 cryptocurrencies in existence at this moment with many of them enjoy immense popularity among the dedicated community of backers and investors.

It is a popular field and the next digital token may be released tomorrow. As Bitcoin is a pioneer in the field, analysts are adopting many approaches for evaluating the tokens other than BTC. Analysts usually give a great deal of importance to the ranking of coins in terms of the market cap relative to one another. Apart from this, there are many reasons why a digital token is included in the list o potential competitors to Bitcoin.

Often referred to as ‘silver to bitcoin’s gold’ it is the earliest follower of Bitcoin when it was launched in 2011. It was created by Charlie Lee, an MIT graduate, based on an open-source global payment network and not controlled by any central authority using the ‘scrypt’ as a proof of work that can decode with the help of CPUs of consumer-grade. It has a faster transaction confirmation as a result of the faster block generation rate. A growing number of merchants are already accepting Litecoin. It has a market cap of $2.63 billion and a per token value of $43.41as of February 9, 2019.

It is a decentralized software platform enabling Smart Contracts and Distributed Applications (DApps) built and run without any downtime, fraud, control or interference from the third party. Being launched in 2015, the applications run on a platform-specific cryptographic token called ether. Ether is similar to a vehicle moving around on the ethereum platform that is sought after by developers trying to develop and run applications inside ethereum or by investors making purchases of other currencies using ether.

It was during 2014, that ethereum launched a pre-sale for ether and eventually receiving overwhelming response ushering in the age of initial coin offering (ICO). Ethereum owns up that it can be used to ‘codify, decentralize, secure and trade anything and everything’. Post the attack on the DAO in 2016, ethereum was split into Ethereum (ETH) and Ethereum Classic(ETC). The market cap stands at $12.49 billion and a per token value of $118.71 as o February 9, 2019.

It is a promising open-source cryptocurrency launched in the latter part of 2016. The makers claim ‘if bitcoin is like HTTP for money, Zcash is HTTPS,’as it offers privacy and selective transparency of transactions. Thus it gives extra security for all transactions recorded and published on a blockchain keeping the sender, recipient and amount private.

The users can use Zcash with a choice of protecting their transactions and allowing the content to be encrypted using the advanced cryptographic technique or zero-knowledge proof construction called a zk-SNARK developed by its team. The market cap of $291.25 million and a value per token of $49.84 makes Zcash a stable coin.

Originally known as a dark coin, it is a secretive version of bitcoin. Offering anonymity, it works on a decentralized master code network making transactions untraceable. It was launched in January 2014 and it experienced an increasing fan following in a short period. The currency was developed by Evan Duffield mined using a CPU or GPU. Darkcoin was rebranded as DASH that stands for ‘digital cash’. But the rebranding didn’t change the functionality or its technological features including DarkSend and Instant X. It's market cap stands at $640.76 million with a per token value of $74.32.

It was launched as a real-time global settlement network offering instant, certain and low-cost international payments in 2012. It is defined to enable banks to settle cross border payments in real-time with end-to-end transparency and lower costs. The consensus ledger which is a method of confirmation is as unique as it can be with no requirement for mining. This sets them apart from bitcoin as well as other altcoins. As it doesn’t require mining, the usage of computing power is deliberately reduced and so is the network latency.

According to experts, ‘distributing value is a powerful way that can incentivize certain behaviors. It helps distribute XRP through business development deals, incentives to liquidity providers offering tight spreads for payments and selling XRP to the buyers. Ripple has set a successful model remaining the most enticing currency among traditional financial institutions set to revolutionize cross border payments. The market cap stands at $12.69 billion with a per token value at $0.308.

MONERO comes as a secure, private and untraceable currency. Launched in April 2014, this open-source cryptocurrency has kept the cryptography community interested. Cryptocurrency is completely based on donations and community-driven. It was launched with a focus on decentralization and scalability enabling complete privacy using a special technique called ‘ring signatures.’

The idea behind the technique is to develop a group of cryptographic signatures including at least one real participant while since all of them appear valid, the real one cannot be isolated. This security measure has helped develop an unsavory reputation for the currency linking it to criminal operations across the world. No matter whether it is good or ill, Monero has introduced the most important technological advance in cryptocurrency. The market cap as of February 9, 2019, is $808.50 million and per token value is $48.18.

One of the earliest as well as successful hard forks of the original bitcoin, BCH holds an important place in the history of altcoins. A fork in the cryptocurrency world happens when there are debates and arguments between developers and miners. The decentralized nature of digital currencies, wholesale changes to the code behind the token or coin has caused a consensus even though the mechanism for the process varies according to cryptocurrency.

The digital currency is split, once the different factions can’t agree. The original true to the original code remains while the other copy begins life as a new version complete with changes to its code. BCH came into life in August 2017 as a result of such a split. The issue of scalability made it possible for the creation of BCH. With a strict limit on the size of blocks, bitcoin had a limitation of 1 megabyte. BCH increased this block size from 1 MB to 8 MB with the intention that bigger blocks allow faster transaction times. Along with this is the removal of the Segregated Witness Protocol that imparts block space. BCH was valued at a market cap of $2.23 billion and a value per token of $126.49.

IT is the largest cryptocurrency China has developed as of now. Originally named AntShares, it was rebranded by creator Da Hongfei and came into existence in 2014. It is referred to as the Chinese Ethereum as it uses smart contracts. 2017 was the most successful year or NEO. Valued at $0.16 per token, it climbed to $162 per token within a year. Subsequently, it brought a return of more than 111,000 %. It supports programming in existing languages including Go, Java, C++, and others making it more developer-friendly.

Being in a positive relationship with the Chinese government, NEO has experienced success whereas the popular belief of harsh positions for the cryptocurrencies in the country. The market cap was set at $492.48 million and value per token at $7.58.

Cardano was introduced by the co-founder of Ethereum, Charles Hoskinson in September 2017. ADA offers its supporters all the benefits of Ethereum among others. It offers the platform for Dapps as well as smart contracts. Along with these, it solves many of the problems plaguing cryptocurrencies including interoperability and scalability.

It hopes to find a solution for international payments that are typically timely and expensive. With this focus, ADA was able to bring down the processing time from days to just seconds. The market cap as of February 9, 2019, was $1.6 billion and a per token value of $0.041.

The newbie in the list is EOS launched in June 2018, created by pioneer Dan Larimer. He had founded the digital currency exchange, Bitshares along with a blockchain-based social media platform Steemit. Similar to others, it is designed after ethereum offering a platform to build decentralized applications. EOS is notable for many other reasons too.

Its initial coin offering was one of the longest and most profitable in the history of cryptocurrency making a record-breaking $4 billion or so in investor funds with crowdsourcing efforts lasting almost a year. It offers delegated proof-of-stake mechanisms hoping to offer scalability beyond the competitors. EOS contains EOS.IO which is similar to the operating system of a computer and thereby acting as the blockchain network for the currency and coins alike. It lacks mining mechanisms to produce coins and block producers, on the other hand, generate blocks rewarding EOS tokens based on production rates. It includes a complex system of rules that govern the process intending to be the network that is more democratic and decentralized than other cryptocurrencies. EOS showed a market cap of $2.49 billion and a per token value of $2.74 as of October 5, 2018.

In the pack of cryptocurrencies, Bitcoin remains the leader in terms of market capitalization, user base, and popularity. Certain currencies like Ethereum and ripple are being used for enterprise solutions while other altcoins are being endorsed for advanced features vis-a-vis bitcoin. Keeping fingers crossed, while cryptocurrencies are here to stay, how many will ultimately emerge as leaders are yet to be seen taking into account the growing competition. Only time will reveal what the future of crypto is.

We Bring Here How Via Its C# Native Platform Stratis Is Providing Blockchain...