Litecoin Gains Ground On Bitcoin In The Dark Web. Bitcoin's congested blockchain and high transaction fees have claimed another casualty. 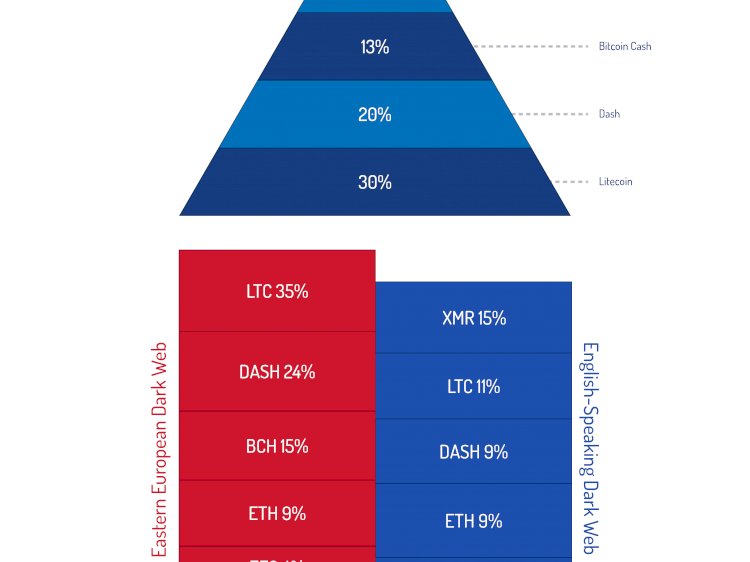 The congested blockchain and high transaction fees have reportedly claimed Bitcoin to be a casualty. The dark web vendors where the cryptocurrency remain unchallenged, as a medium of a transaction has started accepting other coins too. Surprisingly, Litecoin has emerged as the second most popular cryptocurrency for eCommerce transactions on the internet.

Litecoin is used by 30% of vendors using alternate methods of payment according to the report by recorded future. Another popular crypto is Dash, with a protocol well suited for the daily transaction that is accepted at 20% for all stores. The vendors across the dark web accept Bitcoin as a payment system.

The future is bleak as the overall market may diminish in the future with positive pronouncements recorded about other currencies. When a survey was taken, Dash and Monero topped the list with strong privacy credentials while Bitcoin and the Bitcoin cash ranked last. The increased use of the dark web is sure to push transaction volumes forward even though not all are enthusiastic about the association.

The Reason Behind The Switch By Darknet Vendors

The primary reason being high transaction fees of Bitcoin, making it economically unfeasible using the dark web with daily transactions in small amounts. Litecoin is popular because of the faster processing times and can be stored in offline wallets. They provide a convenient method of obfuscating identities and transaction details.

Litecoin comes with the potential to disrupt as well as inspire confidence within the cryptocurrency community. It was the first to back the segregated witness when it was released and the first to integrate it. This allows others who have adopted it to use the lightning network that is nearing completion along with empowering participants to exchange cryptocurrency at no cost.

With the lightning network passing almost all the quality assurance tests required, it was released to the public. The alpha version successfully purchased coffee with no fees which are a result hard to obtain with other payment solutions.

Highlighting the Litecoin due to its speed, cryptocurrency enthusiasts have increasingly explored it. On testing the speed of coins transferred from the exchange to the wallet, Litecoin performed the best transferring 23 coins in under 10 seconds. While paying attention to the fast advancements of Litecoin, the payment is being increasingly adopted into their ecosystems as well.

How Well Is Litecoin Used In Ecommerce?

Stores like BTCTrip, Bitify, AllThingsLuxury, and Bitcoin.shop have joined in as the ease of transacting makes eCommerce one of the most suitable environments. Popular retail eCommerce giant Overstock.com accepts it as a form of payment with people easily paying for gifts, vacations, household appliances and precious metals and gems in growing numbers. Retail adoption is encouraging, cryptocurrency, merchants, exchanges, wallets, and infrastructure integrating Litecoin.

Few Words To Conclude About Litecoin

Less volatility and steady trend make it great for arbitration, trading spending or even fundraising. Comparing the market capitalization of Bitcoin to that of Litecoin with the maximum number of coins and other traits the crypto enthusiasts unanimously declared that it is undervalued. Litecoin is set to evolve into the truest form of cryptocurrency leaving others to dust. Litecoin is set to make serious movements in the crypto market making the evolution an important fact. While Bitcoin is increasingly being found to be a robust predecessor, though there are many coins with the caliber to overpower Bitcoin.

The market of cryptocurrency is evolving strongly as the Bitcoin era has almost set in and newer better options are emerging. It may spell the death of the outdated predecessors who have served the eCommerce scene better and almost completely giving an award-winning entrance to the latest cryptos. This doesn’t mean Bitcoin will be outplayed. Rather the tight competition will prove a challenge for developers to bring more strong alternatives and innovative ideas. When the Bitcoin mining makes a strong comeback many of the present coins are set to be outdated. Thus we can expect a consistent evolution across the cryptocurrency ecosystem. Cryptocurrency is the promise of the future and there is no going back in this ecosystem that has brought critical change to the currency world.

How You Can Get Up to 17% Annually by Holding Digital Assets As Crypto...