Understanding the complex idea of proof of burn for cryptocurrencies. This write up helps you understand more about it. 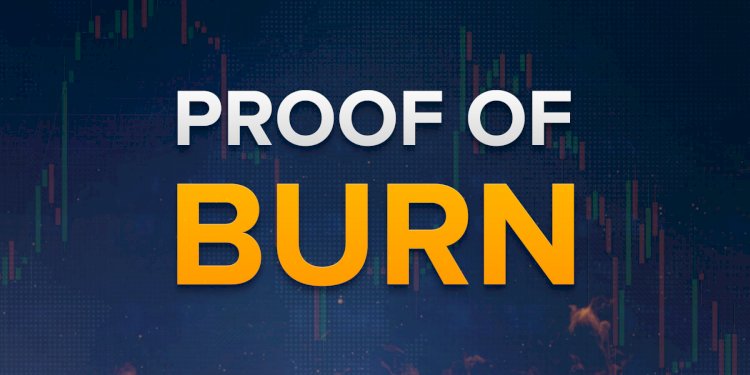 Explaining What The Proof Of Burn For Cryptocurrency Is

It is explained that proof of burn is one of the several consensus mechanism algorithms that is implemented by a blockchain network to ensure that all participating nodes agree to the true and valid state of the blockchain network, where the algorithm is implementing to avoid the possibility of any cryptocurrency coin double-spending. Therefore proof of burn follows the principle of burning the coins held by the miners that grant them mining rights.

Explaining The Proof Of Work

Thereafter the most well-known type of consensus generating algorithms is called proof of work where miners are rewarded for updating the blockchain as this entails using computing power to solve a mathematical equation resulting in a monetary reward. Therefore Bitcoin, the original and most popular cryptocurrency use a POW system. Thereby the more a miner pays for the computing equipment required to solve the cryptographic puzzle, the higher the chance that they will score the right to mine the blocks, and a POW approach requires costly mining hardware devices, and this method is hampered by high power consumption.

It is because of this POW method that it so resources intensive while it’s not very efficient and then the POW currencies including Bitcoin aren’t very useful as a fungible instrument.

What Is The Proof Of Stake?

Here there is another algorithm called Proof of stake allotting mining rights to miners proportional to their stakes held in the cryptocurrency while in the system the blockchain is maintained thereafter by a randomly selected group of those validators who stake the native network tokens and by locking them into that blockchain to produce as well as approve blocks. It is unfortunately the more complex construction of POS systems making them more vulnerable to attacks and because benefits flow increasingly to the largest coin holders in a POS system the richer you are, the richer you get.

What Is The Proof Of Burn?

An alternative consensus algorithm called Proof of Burn tries to address the high energy consumption issue of a POW system and is often called a POW system without energy waste operating on the principle of allowing miners to burn virtual currency tokens as then granted the right to write blocks in proportion to the coins burnt.

The inventor of the POB algorithm Iain Stewart uses an analogy, a miner burns the coins to buy a virtual mining rig giving them the power to mine blocks. Here the more coins burned by the miner, the bigger their virtual mining rig will be.

The truth is that thereby to burn the coins, these miners send then to what verifiably un-spendable address along with the process is not consuming many resources ensuring that the network remains active and agile depending upon the implementation where miners are allowed to burn the native currency or the currency of an alternate chain similar to Bitcoin. Thereby in exchange, they receive a reward in the native currency token of the blockchain.

Similar to this it is possible to prevent the possibility of unfair advantages for early adopters where the POB system has implemented a mechanism that promotes the periodic burning of cryptocurrency coins to maintain mining power as it burns coins decays or reduces partially each time a new block is mined. Hereby it promoted regular activity by the miners instead of an onetime early investment. Therefore to maintain the competitive edge, miners surely need to periodically invest in better equipment as technology advances.

Concluding With An Example Of Proof Of Burn

The fact is that POB implementation can be customized whereas an example, Slimcoin, a virtual currency network uses POB allowing a miner to burn coins that not only gives them the right to compete for the next block as also gives them the chance to receive those blocks during the long period, for at least a year.

It is then essential that Slimcoin’s POB implementation combines three algorithms, POW, POS, and the core POB concept. It is this process of burning coins utilizing POW that more coins one burns the more chances one has to mine ensuring POS and the whole ecosystem following the POB concept.

6-Digits 'Inevitable,' According To Bitcoin's Big Believers: And Here...

The Current Headline Is That Pablo Escobar's Brother Launched A Cryptocurrency